I recently signed up for a new service called Summify that “creates a periodic summary of the most relevant news stories, from all of your social networks, and delivers it by email and on the web”. In short, Summify emails you links to stories that your network has shared during the last hours or days. 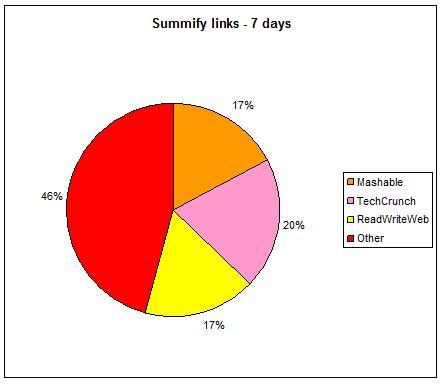 When I first joined, I only connected my Twitter account to the service. After about one week I wanted to check what types of links Summify had sent me. I had chosen to get 5 links per day, but you can select another frequency and a different number of links. Turns out that a majority of the links are from TechCrunch, ReadWriteWeb and Mashable. In total, 19 out of 35 links are from these three sources.

For me, that is not very valuable. If you are the type of person that check Twitter on a regular basis, you will probably already have seen most of these stories. These three are among the most read social media and tech sites on the web so I have probably already seen the most interesting stuff from them. A typical link, like this one from Mashable, has been tweeted more than 1,400 times and shared 240 times on Facebook in less than a day. I had hoped that I would be exposed to links to stories that would be interesting to me, but that I probably hadn’t seen, not “most tweeted stories”.

On the other hand, you can use Summify as a filter to catch up on the stories that most people talk about. So if you are not a social media junkie who is on Twitter all day, Summify summarizes the most talked about stories, using your friends as a filter. Check Summify and you will be up to date with the latest news.

Now I have also added my Facebook and Google Reader accounts to Summify. Hopefully that will increase the number of sources that Summify sends to me. I will try to follow up this post in a few days to report if there has been any “improvement”.

24/7 Wall St. lists what they believe are the 25 most valueable blogs in the U.S. The latest ranking estimates that the top 25 US blogs are worth $729 million in total. That is a considerable increase since the previous ranking in February 2009 that valued the top blogs to a total of $482 million. For the analysis, the site has moved up the multiples assigned to blog revenue and operating profits because of the recovering economy, so that the blog value better reflects the increase in prices paid for online media properties.

Related: In 2007, an estimate by the media agency Wisely said that the top 20 Swedish bloggers had a potential combined annual advertising income of 100 million kronor (14.5 milllion USD). That turned out to be vastly exaggerated. A blogger writes a provocative post with claims that turn out to be completely false. It happens every day, why should I care? Well, if the blog in question is no other than TechCrunch, things start to get a bit problematic. The site is so influential that its content reaches many thousands of people. As you may have read in my previous post, TechCrunch posted an article on July 31 claiming that Sweden and Canada are among the worst emitters of greenhouse gases in the world. This turned out to be at least partly bogus but TechCrunch shows no interest in correcting the misleading information.

Actually I don’t really care if people lose trust in TechCrunch, but when disinformation about my country keeps on spreading across the web, I feel I need to raise my voice. The false article is bad enough, I could live with that. But due to the authority of TechCrunch and the behaviour of its readers, the false statements continue to have an impact for a very long time. Here’s why:

– As seen on Techmeme, Twitter users are still retweeting links to the article so the lies keep reaching new people. In total at least 220 retweets so far.

– The article has been dugg 110 times on Digg and I’m sure it has been shared on many other different platforms during the last few days.

– All this sharing helps place this story high on Google. For instance, in a search for “worst country greenhouse gas” the TechCrunch article comes up first. A search for “Sweden greenhouse gas” shows the article on top as a news result, with three more mentions in the first ten results. There is an obvious risk that the false facts will stay around and influence people’s opinions and views about Sweden.

There is really no need to add more proof, all the arguments and links are clearly available in the comments to the TechCrunch article. But just to point out how ridiculous statements like “So who are the worst offenders? Topping the list is Sweden!” are, I have compiled two tables below.

As TechCrunch actually noted further down in the article, USA is the country among the 42 in the report that emits most greenhouse gases. But a more fair comparison of course is to look at how much gas each country emits per capita. So I took the liberty of compiling a table of the 42 countries, based on the total emissions for 2006. Population numbers from the Population Reference Bureau (pdf). The tables show that Australia is topping the list, which is due to a high reliance on coal to generate electricity. The US is in the top along with Canada, with Sweden at the very bottom.

Another way to illustrate how much greenhouse gas a country emits is by looking at the amount of emissions divided by GDP. That could illustrate the ability of a country to generate wealth with a small impact on the global environment.

In the following table, countries in Eastern Europe are the worst, while again Sweden is at the very bottom. If you feel like I do, please continue to comment the article. You can also blog about greenhouse gas emissions and link to a trusted source (like some of the links above) so that the correct information climbs in the Google results. You can tweet about the story and include the hashtag #techcrunchfail.

Don’t sit back and let this insult stand unchallenged.

Additional links:
Sweden does the most of any country for tackling emissions of greenhouse gases. TechCrunch is the second most influential blog on the planet according to Technorati and with such authority comes a huge responsibility. Thousands of readers read the content and spread links to newsworthy articles to even more readers via Digg, Delicious, Twitter and so on. Unfortunately many people only scan headlines and quickly read the through the content which means that if a story is not correct, misleading information quickly spreads across the web.

TechCrunch yesterday published a story with the headline “Google Maps Don’t Lie. Sweden And Canada Among Worst Greenhouse Gas Emitters.” How sensational, those self-righteous Swedes are worse than Americans. Yay, I can keep my Hummer. Such a provocative headline obviously appeals to a lot of people who share the story with their friends. Tweetmeme has tracked 166 tweets about the article so far and most of them just recycle the headline and the link. The problem is that the entire story is bunk for several reasons.

First of all, the data that the article is based upon shows that Sweden has had the highest increase (in percent) in green house gases from 1990 to 2006 (with 110%). While that indeed looks bad it does not mean that Sweden a) emits most of all countries or b) emits most per capita. To the contrary, a quick look at the data reveals that the US and many other countries emit many times more per capita than Sweden.

Second, as is revealed in the comments, the map is based on incorrect data. Sweden has produced a new report with updated data that show that Swedish emissions in 2006 were at level with 1990 (zip file). In other words, not even an increase compared to 1990.

The first point above is just the result of poor journalism by TechCrunch, but the second point is harder to foresee. But readers quickly pointed out the first mistake that the writer Erick Schonfeld had made so it wouldn’t have been especially hard to correct the misleading headline and content. But Schonfeld apparently didn’t see it that way, instead he posted denigrative responses to reader comments.

“Do you dare question a Google Map?”

“Where did you learn to read, Sweden?”

“That is the default map. Go petition the UN (or Google) if you think it is misleading.”

Instead of doing the right thing and using the input from readers to improve a poor article, TechCrunch chose to leave incorrect statements up on their site. Instead of subscribing to Dan Gillmor’s view that “my readers know more than I do”, TechCrunch apparently think that their readers are idiots (and that Swedes can’t read).

Any leading publication today, be it a blog or a traditional newspaper, must take responsibility for the content they publish if they want to keep any sort of credibility. Everone makes mistakes, but news is shared at lightning speed today and if you are the source of incorrect information that spread across the web, you should do everything in your power to stop the false information from spreading any further. If not, how can anyone trust you in the future?

I didn’t expect this kind of behaviour from a leading blog in 2009. Big fail.