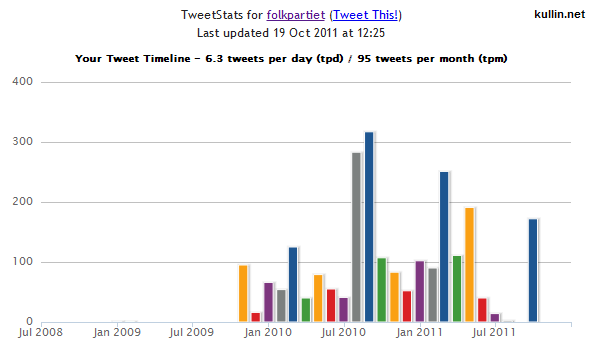 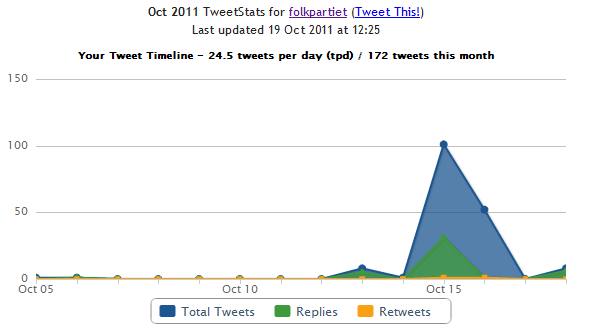 With less than two weeks left until the election to the EU Parliament, Burson-Marsteller (where I work) launched TweetElect09.eu, a website that tracks and analyses discussions about the upcoming European Elections on Twitter in 14 languages.

Tweets are filtered by country, political party and by number of times different candidates are mentioned. News will also be streamed on election night by for example France24, alongside the Twitter stream.

TweetElect09 has already analyzed more than 11,000 tweets referring to the election and France is the most active country followed by Sweden in second place and Germany in third. Anyone can join the discussion and have tweets appear on TweetElect09 by using the #eu09 hashtag when tweeting. The site also tracks tweets with the tag #euval which is frequently used in Sweden.

More information in English and in Swedish.

Moderaterna, the Swedish Moderate Party which is part of the ruling right-wing coalition, predict that blogs and social media will become an integral part of the 2010 election campaign. In a speech this weekend in Sollentuna outside of Stockholm, Secretary-general Per Schlingmann said that the web will be the hub in the next campaign (my translation below).

The web will be the hub in the campaign. In ten days we will release our new digital platform which will create new opportunities. How well it turns out depends on us. How open do we dare to be? Dare we let go? For me one thing is clear: in the election 2010, every Moderate blog will be valuable, every Moderate video, every Moderate Facebook group. Let us make sure that there will be as many as possible. I am also convinced that we will carry out more activities where we will meet voters directly, but these activities will be co-ordinatet online and will make it easier for people to take part of our campaign.

The prediction that the next election will be web-centric is not very risky, but nevertheless it is interesting to see that the Moderate Party is stressing social media tools so actively almost two years ahead of the election.

During the last few months, blogs have made a huge impact on the political arena, first and foremost from the FRA debate, i.e. the resistance to the new controversial Swedish wiretapping law that enables FRA, Swedish National Defence Radio Establishement, to screen and store all digital traffic passing Swedish borders. Blogs about politics and society are also one of the most popular categories in the Swedish blogosphere. The blog portal Knuff.se lists the 50 most linked to blogs in Sweden and currently about 24 of the top 50 are commenting regularly on political topics.

A question I would like Swedish party strategists to answer is how they plan to engage with female voters via social media. If my latest blog survey BlogSweden 3 is anything to go by, female blog readers don’t see blogs as an interesting channel for news about politics and society. While this was the most popular topic among male blog readers (49.2% of all male blog readers), the situation was radically different among female blog readers.

The Swedish journalism professor Kent Asp said a few months ago that blogs have had almost no effect on the local political opinion. Regardless of how close to the truth such a statement is, there is enough signs from the other side of the pond that we can be convinced that blogs and social media have great potential to impact political views and elections. In Malaysia, the ruling party seems confident that blogs will help the party get re-elected.

CNN reports:
“Abdul Rahman Dahlan, secretary general of the United Malays National Organization party’s youth wing, said all those vying for national youth posts must have blogs to introduce themselves and their programs ahead of party elections in December.”

“All candidates must have blogs,” Abdul Rahman told The Associated Press. “If not, they are not qualified to be leaders.”

Footnote: In Sweden, blogs about politics are among the top categories. On Bloggportalen for example, there are close to 4,000 blogs listed in that category which makes it the third most popular, and 1,053 are listed in the sub-category “politicians”.

Social networking sites may be playing an important political role in the 2008 US campaign for young people, according to a new study by Pew Internet.

“Fully two-thirds of Americans age 18-29 say they use social networking sites, and more than a quarter in this age group (27%) say that they have gotten information about candidates and the campaign from them – including 37% among those ages 18-24. Nearly one-in-ten of people under age 30 (8%) say that they have signed up as a “friend” of one of the candidates on a site. And the numbers are even higher for each of these activities among young registered voters.”

Maud Olofsson, the Swedish Minister for Enterprise and Energy, was scheduled to chat with readers at Aftonbladet.se yesterday. The problem was that she was in an interview with the local daily Västerbottens-Kuriren at that time. So instead of calling the thing off, her press secretary Lisa Wärn chatted in Olofsson’s name without revealing that readers weren’t atually chatting with the Minister.

When Resumé asks Wärn about how clever it was to let Maud Olofsson sit with another reporter during the “fake chat”, she replied:
– That was the mistake.

But it wasn’t the risk of being caught that was the mistake, of course, but instead the decision to decive the readers with a ghost writer.

Update: The entire chat is still up on aftonbladet.se, and knowing that “Maud” is not Maud, makes reading it extremely funny. Via Sydsvenskan and Vassa Eggen.