I had barely posted my latest blog post about how Expressen had decided to stop hosting blogs, before I read on DagensMedia.se that the other Swedish tabloid Aftonbladet is doing the same. Aftonbladet has two types of blogs – blogs by the editorial staff and blogs that readers publish. It is the latter group that is being shut down because they are unprofitable.

Reader blogs will be taken offline on June 30, so bloggers will have to move their content elsewhere if they want to keep it online. As noted in my previous post, Aftonbladet recently added the ability to export the content to WordPress.

In other words, three large Swedish newspapers have either decided to shut down our outsource the hosting of readers blogs, in the last three months. What will that mean for blogging in Sweden? Not much, I guess. There are plenty of good options and I would suspect that many of the active “newspaper bloggers” will continue to blog, either take their content to a new platform or start fresh with a new blog.

In February, the free Swedish daily Metro said it would shut down all of the thousands of blogs they hade been hosting since 2007. Metro eventually found a solution to keep the blogs running and move them to a new platform (WordPress). Today another Swedish newspaper, the tabloid Expressen, announced they would stop hosting blogs. All blogs except a few reader blogs Expressen considered “worth keeping”, and the blogs of its own journalists, will be shut down.

– Our blogging platform is lacking in functionality, we have been focusing on other things and we are now offering our bloggers to move over to other platforms. We do not have the resources to keep the blogging platform running, says Mattias Carlsson, editor in chief, digital media at Expressen (my translation).

It’s not surprising that newspapers have a hard time competing with other blogging platforms and the question is how long Aftonbladet will continue to host blogs. Since April 2011, bloggers have the ability to export their Aftonbladet blogs to WordPress. Maybe it is a sign of what’s to come?

Footnote: Here’s how Expressen presented the initiative as a success after it launched (in Swedish).

I’m very proud that Media Culpa has been included in HubSpot Hot 100 Marketing Blogs, a list of top blogs about online marketing.

My blog is currently ranked surprisingly high, at #6, which is extremely flattering considering all the industry luminaries that are included. The ranking is performed by the Blog Grader tool and the report card for my blog can be found here. 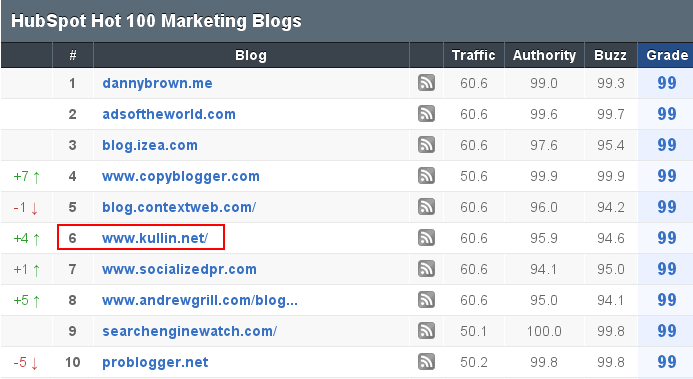 I blogged earlier this week about how Metro had decided to shut down its blogging platform Metrobloggen.se, leaving thousands of bloggers with no other option than to cut and paste, if they wanted to move their content to some other platform. In a statement, Metro now says it is going to “save” all blogs from deletion. My translation below:

“Metro will soon, and well before April 25, offer all bloggers on Metrobloggen the ability to continue blogging. Current content will also be saved. We will get back with further information shortly.”

I think that Metro could have investigated this before they communicated that the platform was being closed. This new statement comes just a few days after the first one. Still, we don’t know if they are offering some tool that enables exporting of content or if they just offer to save the content as is. Either way, it is positive news that they will help bloggers to keep their blogs up in some form.