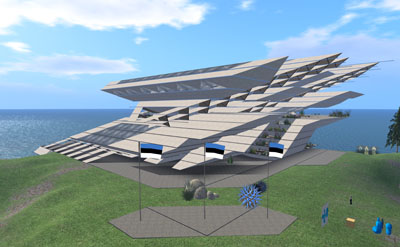 Today the Stockholm city executive board will decide on a new policy against graffiti. All graffiti on city property will be removed within 24 hours according to the new policy which is an attempt to make Stockholm as clean as Helsinki. But not only real buildings can be the target for such vandalism, it can also be found in virtual worlds like Second Life. Apparently the Second Life headquarters of US presidential candidate John Edwards “suffered an attack by vandals last week, when shortly before midnight, the virtual building was defaced by a group of Second Life users bearing “Bush ’08” tags.”

MediaPost writes that this wasn’t “the first high-profile attack Second Life has seen. In December, when CNET interviewed controversial Second Life businesswoman Anshe Chung, a virtual real estate dealer who has been described as Second Life’s first millionaire, the theater was attacked by griefers who bombarded Chung with flying, animated phalluses.”

Riding on the hype from a potential launch of a Swedish Embassy in Second Life, the first Swedish paper has bought a piece of property in the virtual world. Last Friday, the Swedish daily Sydsvenskan launched its own island in Second Life in co-operation with communications agency Good Old.

Writes Good Old:“The island is called Sydsverige which translates to “Southern Sweden”, which is the area of Sweden that Sydsvenskan covers. The plan is to create a place where Swedish people can meet, and create their own projects if they want to. The planning will take place together with the visitors that are interested.”

Yes, folks. It’s that time of the year again. Time to take a look into the crystal ball and predict what will come in the next 12 months. Here are some things you can expect from 2007:

* Linden Labs launches Third Life within Second Life, in which the avatars of Second Life are able to create digital 3D representations of themselves, so called avatars. This is the first Third Life to be launched within Second Life. The currency of Third Life is called London dollars, which causes an uproar among English avatars.

* A blog is launched in which a couple report about how they travel across the US in an RV and camp in parking lots of the PR agency Edelman PR’s offices. The blog “Edelmaneuvering Across America” turns out to be a publicity stunt by Wal-Mart with the purpose of enhancing the damaged reputation of its PR agency.

* Metro, the world’s largest free newspaper, teams up with local post offices in 19 countries with the purpose of providing hyper-local news to its readers. “The mail men are already out there, visiting every house. No-one sends letters anymore, but this way they will be able to do something useful, like peak into people’s houses and report what they see. It’s a no-brainer, really”, says Christer Fingerspitzgefühl, Chief Instigator at Metro International.

* Someone uploads a video to YouTube in which he reveals how you can open a cheap Bic pen using a very expensive bike lock from Kryptonite. The Bic share on the Paris stock exchange immediately plunges before a crisis communication team is able to restore confidence in the product. “We will be issuing a global replacement program shortly. Old pens can be sent to that place where pens always seem to disappear, it’s right next to the place where all second socks can be found,” says a PR spokesperson from Bic.

* Mainstream media are pushing the citizen journalism trend so far that reporters are quitting their jobs in order to be just “ordinary people”. “This is the only way that I will be able to get anything printed nowadays”, says one columnist at the Spokesman-Review in Spokane, who prefer to be anonymous.

* Media Culpa initiates the third annual Swedish blog survey that shows that 102% of all bloggers write blogs about fashion and only 0.9% have nothing against being contacted by middle aged men who perform blog surveys.

* Swedish “anti-Big Brother” personality Pär Ström discovers the 7 1/2 floor of his office building and finds a portal directly into the mind of former Minister of Justice Thomas Bodström.

* Rupert Murdoch enters the Danish newspaper market with a new free daily which covers news and events in the Danish free paper market. Dato, 24 Timer and Nyhedsavisen are delighted that someone now is actually interested in the stories they rewrite.

* Sweden’s blog princess Karolina Laika is invited to the ISS space station only to find that some of the space suits are sooo 1985.

* Technorati teams up with IBM to enable grocery shoppers to read what bloggers are saying about products. A service tracks the blogosphere and delivers search results directly to the store via RFID. Sales of pickled herring immediately drop to an all-time low after an “incident” with herring and a Christmas Party is filmed and uploaded to YouTube.

So now you know…

One in two PR executives are not doing their job properly. A survey of more than 1100 PR executives from agencies and corporations in the US and UK reveal that 49% of respondents don’t even monitor blogs. Furthermore it says that:

“63% have not adapted their communications strategy to include proactive outreach to blogs, message boards, and other forms of digital mediums.”

Blogs are fairly easy to monitor and there are a number of free tools available. Next things to watch are wikis, social networking sites, Second Life, YouTube etc that need to be on PR executives’ radar.

Second Life is a very popular online social network, “a 3-D virtual world entirely built and owned by its residents”. I’ve never looked at the site myself but I have a tiny grasp of what the community is about thanks to the For Immediate Release podcast. Now PR Week reports that PR agency Text 100 is set to open an office on its private island in Second Life. Apparently more and more businesses are exploring the online virtual worlds in order to learn more.