I blogged a week ago about how Delta Air Lines lets customers book airline tickets on the Delta Facebook page. EasyJet also has this application on its page on Facebook. Now Lufthansa has also introduced the same functionality to its page and it is available for customers in Sweden, USA, Germany, India, Spain, Great Britain, Greece, Turkey and the United Arab Emirates. Further markets will be added by the end of the year.

Lufthansa  also cooperates with the location-based site Foursquare in Germany and users who check in at three different locations via Foursquare can get a 20 euro voucher for their next Lufthansa flight booking. Users who select a certain country, get local news (see below from Sweden). The travel industry is turning to social media in order to build relations with customers and to promote its services. During the eruption of the Icelandic volcano in April, airlines, airports and travel agencies successfully used social media to communicate with travellers. Twitter was one of the channels that many used to update customers about delays and cancelled flights. Companies that tweeted actively quickly gained a large number of new followers, as seen in the presentation below, which would indicate that customers find it useful to follow companies on Twitter.

Another great social media case from the travel industry is the Twitter application by Lufthansa, called MySkyStatus. The site lets users automatically share flight information via Twitter, Facebook or LinkedIn, while in the air. The site is now open for travellers on all major airlines and everytime someone uses MySkyStatus they are greeted by the message “Powered by Lufthansa”. It’s a great way to add value to travellers and at the same time expose the brand to thousands of potential customers. To date, the site has distributed more than 400,000 status updates (81,000 on Facebook and 21,000 on Twitter). 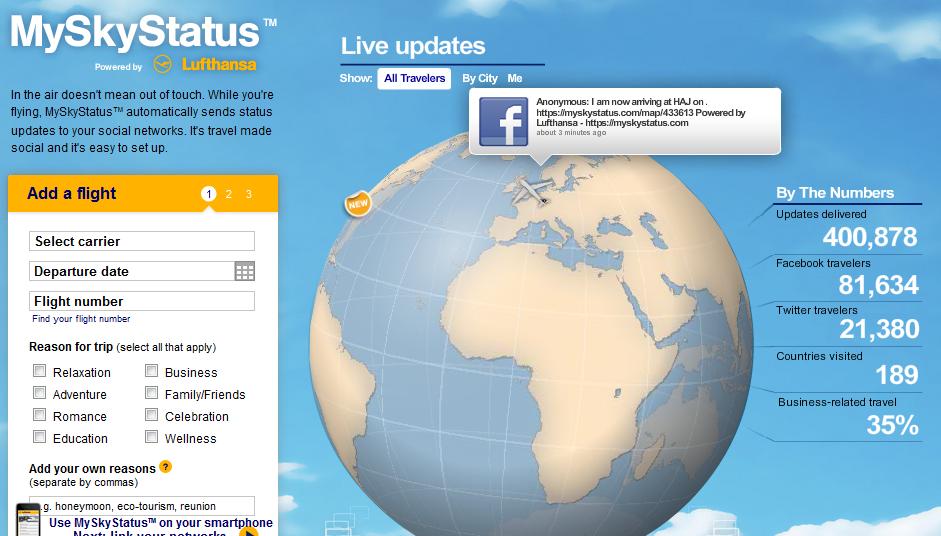 Yet another example, soon to launch, is Topguest.com, a site that rewards travellers that frequently check in on hotels and other places using location based services such as Foursquare or Gowalla. According to USA Today and CNET, Topguest has launched a preview version that includes a co-operation with hotel chain Standard. Guests that check in using Topguest get a discount:

The Swedish travel agencies Ving and Fritidsresor are actively answering questions from customers on their Facebook pages and they use Twitter to distribute promotions. There are many other good cases from the travel industry, which seems to be one of the industries that are most actively embracing social media. Other companies take note.

In January, Washington Post invited local D.C. bloggers to participate in a blog advertising network where the Post would share revenues with bloggers from ads sold by the paper’s sales staff. Now Mediapost reports that Lufthansa has signed up as a sponsor of the travel category and Lufthansa’s ads will run on all 100 travel blogs in the network. This makes the airline the first advertiser to sponsor an entire vertical category.