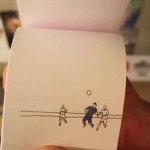 I blogged the other day about how a “viral agency” had been posting nice reviews in Swedish online forums on behalf of Samsung, but without disclosing their true identity. The scam was revealed and in a comment to the marketing blog Adland, Samsung said that the procedure was out of line and that they had put an end to it.

However, it seems that this undercover operation to get a buzz going may not be limited to Sweden. In an article today on the UK computer forum Computeractive.co.uk, Deputy Editor Tom Royal, writes that someone has started threads on the forum, promoting Samsung products such as digital video cameras.

“The user who started the thread wanted to share a video showing the “12 Mega Pixel quality that creates a clear and fine video” of a Samsung camera – which is fair enough, perhaps. But then check his previous posts: here, here and here. It’s fair to say that he’s very interested in Samsung products and nothing else.”

The IP address to the user “Huey” comes from Seoul, South Korea. Tom Royal is pointing out that the IP addresses are not directly associated with Samsung. But we are starting to see a pattern here. I did some further investigation and found that the video that was linked to in the Computeractive forum has also been posted on a number of Korean forums, as well as this UK forum. The text in this post is the exact same as the text on Computeractive:

“This is a short sample video that is recorded by a new Samsung camcorder R10. Although the environment of aquarium was not proper enough to shoot by a camcorder, R10 did capture every single movement of beautiful sea animals in a dark aquarium. It has a 12 Mega Pixel quality that creates a clear and fine video.”

Even though we still have no evidence that this was done on purpose, it may just be a fanatic Samsung fan, we should dig a little deeper. If you do a Google search of a snippet of the text above, you get more hits in online forums, for example here. Once again, same video, same text as above. But this time it was posted by a user named “samsungimaging”, located in London, which is also linked to an official Samsung page called http://www.samsungimaging.net and this page is run by Samsung: “SamsungImaging.net© has been launched in January 2009 by Samsung Electronics, in order to improve the relationship and communication with our customers.”

Other places with the same text and video are here, here and here.

I realize that it is possible that Samsung has nothing to do with the spreading of this video, it may just be enthusiastic fans or spam sites that scrape content online. But it is starting to look a bit suspiciuos don’t you think? Tom Royal has tried to get a comment from Samsung and promised to post if he gets a response. We will continue to follow this story as it unveils. Volkswagen turns to social media when promoting new cars. In a recent Advertising Age article, Volkswagen of America says it is launching the next generation GTI exclusively on an iPhone app, because it is a cost-efficient marketing tool. Compare that with the $60 million Volkswagen spent on TV commercials on the 2006 launch of GTI.

And in Sweden, Volkswagen has produced three videos that have gone viral, to the extent that one of them has become the most viral video ever made (even more viral than Susan Boyle, thank God), at least according to the Viral Video Chart. “Pianotrappan” (the piano stairs) has been viewed almost 7 million times in less than a month, but what makes it the most viral video is the number of blog posts and tweets about the video (3,100 blog posts and 12,800 tweets). Well done Volkswagen and DDB.

See also the other two videos here and here.