Do you want the recipe for the ultimate viral piece of social media content? Take one part statistics (of questionable accuracy). Add the most hyped social sites like Pinterest, Facebook and Twitter. Put the information in an infographic which you can then pin on Pinterest, blog, tweet etc. I am sure you will see a huge number of likes, retweets, repins by people who think your content is absolutely brilliant, or rather, people who are too lazy to examine the accuracy of the content. Because that is how most of us behave online these days, me included. We read something about a topic we find interesting and we share it instantly without reflecting much on whether the information is likely to be true or not.

When blogs began to appear we got all excited over the prospect that there were now an army of watchdogs out there, just waiting to bite into any piece of twisted fact, inaccuracy or lie. Transparency would rule and the world would become a great place again. Instead, the pace of social media has turned most of us into an army of watchers, often only passively looking at what others produce, only capable of amplifying a message, or worse, distorting it along the way so that what was initially a factual piece of information, becomes something erroneous. Much like a game of Chinese whispers.

For example, do you think it is possible that Pinterest will drive 40% of all social media sales in Q2 2012? I think that sounds unlikely, but that is what this infographic is stating.

The infographic has been published by Tamba in the UK and is a few months old, but is still being passed around online, for example a post was published yesterday on Ragan.com also claiming that Pinterest is “to drive 40 percent of all social media purchases”.

To start with, what does that mean? All sales on the entire planet, or are we talking about the US? After a bit of digging I eventually found the source of this piece of data. In April, Venturebeat published an article by the CEO of Convertro, that projected Pinterest to increase its share of social media sales from 17% to 40%. But this is not for all businesses online, this data is based on “measurements we made across 40 of our client sites — most of which are top 500 internet retailers”.

So, data from an undisclosed set of 40 retailers are supposed to represent every company on the planet that sells stuff online? That is just ridiculous. You cannot make any statistical conclusions from that type of data collection other than that you will know what sites that drive sales for these 40 retailers. Typically, these kind of details are often missing when someone else uses them to make an infographic and suddenly the Chinese whisper game is on.

Besides, as I blogged some days ago, there are some signs that traffic to Pinterest has levelled out. Since there are no official statistics from Pinterest that show us if the site continues to increase, we can only guess. But if you ask me, I would not state that Pinterest drives a certain percentage of all the traffic to e-commerce sites, because we simply don’t know.

There has been an incredible hype over Pinterest during the last six months or so, to the extent that many claim it is a must for business marketers. While I have no problem in seeing benefits with the site, a word of caution might be in place. The site grew extremely fast for some time, but will this growth continue or will users leave the network once they tried it a few times?

I don’t know, but take a look at the three graphs below. Although there is reason to be careful with reading too much into this statistics, it sure does look like traffic to Pinterest has stopped growing as fast as it did in early 2012, or even stopped growing at all. What do you think, are you using Pinterest as much as you did six months ago? 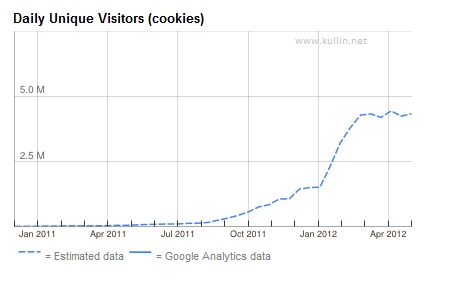 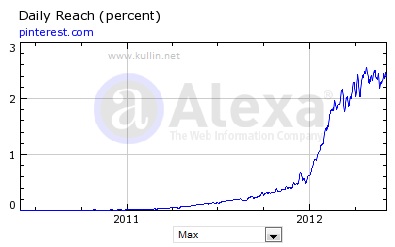