According to a UK survey by Lightspeed Research, customers are now making complaints about brands more often on the web than on the phone. It is far more common among 18-34 year-olds to complain on Facebook than among older consumers (15% compared to 5% and 4%).

How do you normally make complaints about brands? 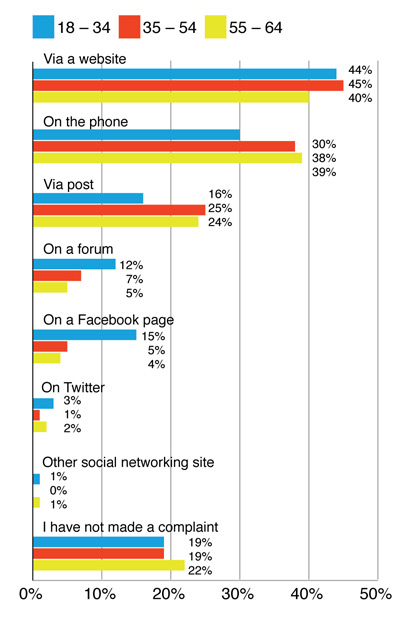 How quickly would you expect a brand to get back to you? (those who lodged a complaint online) 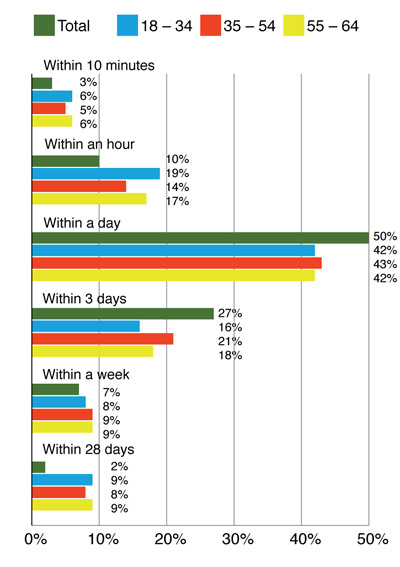 SOM-institutet, the SOM Institute at Göteborg University, has released the results of a study about blogging – “Bloggers – who are they?”. In my view, the researcher Annika Bergström has had a somewhat skeptic attitude towards the role of blogs in previous comments. In an interview in Dagens Nyheter in 2006 she said about our media consumption that “there are changes, but they are slow, there will be no revolution”. She also commented to IDG.se that the differences in blog adoption between Sweden and the USA is due to strong Swedish tradition to read newspapers.

– Swedes turn to traditional dailies online for information. And we don’t get more time just because new media appear.

This skepticism is visible also in the “new” study. I write “new”, because the data was collected during the fall of 2007. In the report, Bergström writes:

“The survey was conducted during the fall of 2007 and it is likely that the use of blogs have increased slightly since then, but if we look at what we know from the development of other areas of online behavior we should expect only small changes.”

The study says that only 2 percent of Swedes wrote a blog each week and that 15 percent read a blog weekly. Good for us then that the World Internet Institute the other day released it’s fresh report about how Swedes use the internet, so we have figures for 2008 to compare with.

WII says that 5 percent of the population blog and 26 percent read blogs, which according to me is more than just a “small change”.

When respondents in the SOM survey were asked if they had read a blog during the last 12 months, 39 percent said yes. Still the final comment in the report reads:

“The previously mentioned debate about the importance of blogs, is to a high degree about what a small portion of the population engage in. With that said, there is nothing that says that single blogs can have a larger influence in society.”

This old data seems to appeal to TU, the Swedish Newspaper Publishers’ Association. On its site TU comments on the “latest figures” on blogging like this:

“Nowadays it seems like everyone is blogging. But it is not entirely true. Two percent of Swedes blog each week. And 15 percent reads what they write. The so called blogosphere is, in other words, smaller than the impression we get from the media attention.”

Stats from WII suggests that 1.9 million Swedes read blogs so I think it is safe to say that blogs are starting to reach a significant portion of the population. In my view, this study is based on data that is too old to really have any real value, and it doesn’t do newspapers any good to take these figures as a sign that blogs and other online channels are no big threat to them.