Twitter made a successful debut on NYSE a few days ago and as a listed company there will surely be an increased attention to revenues in the months ahead. Revenues that will come from for example promoted accounts, trends and tweets. So prepare to see more sponsored tweets in your Twitter feed from now on.

We can already see more examples of businesses that are experimenting with advertising on Twitter. One key factor in the future success of Twitter is its ability to gather enough relevant data about its users so that advertisers can target their key audiences properly. If you advertise on Facebook you are able to select targets based on age, geography, interest and so forth in quite som detail. At the moment, either Twitter isn’t able to provide this data to its advertisers, or the advertisers are ignoring it. 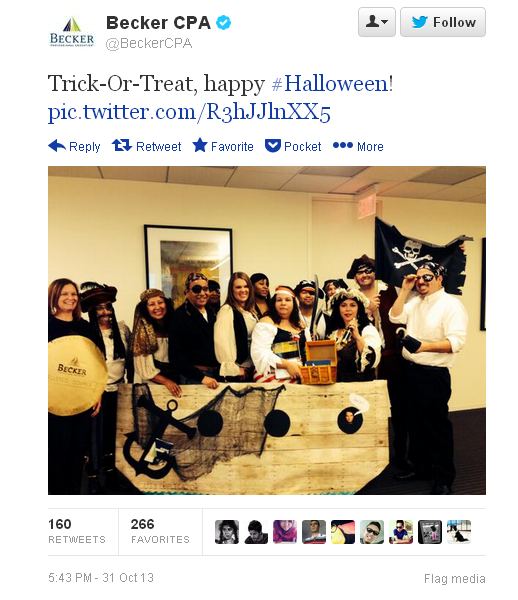 For Twitter to be able to increase revenues from sponsored tweets, it is vital that the ones we are exposed to are as relevant as possible. I blogged recently on my Swedish blog about the nasty and angry responses to one promoted tweet on the Swedish market by Scandinavian Airlines, SAS. Users have been spoiled since they have been able to use Twitter for free for so long and any change towards more ads is seen as a deterioration.

The tweet pictured above is totally irrelevant to me for two reasons. First of all the timing. Why advertise a Halloween tweet more than two weeks after Halloween? Second, why is this ad in my feed at all? I am from Sweden and I have noted both my country of origin and language (Swedish) in my Twitter settings. Sure Becker is an international company but they have no representation in Sweden. The chance that this message is relevant to me is next to zero.

That’s just one of many similar examples from the last week or so. Here are two more. The first is a post by Al Jazeera and I can’t even read the letters. Obviously, I will never be a customer to America’s Natural Gas Alliance. So why am I exposed to these irrelevant ads? I can think of a number of reasons, some mentioned above. However, I think it comes down to this sentence on the business section on Twitter regarding pricing for promoted tweets.

This basically means that an advertiser never pays extra for having its tweets posted in the feeds of people who would never be interested in its message. The advertiser only pays for interactions and if users are exposed to an irrelevant ad they just ignore it. The only part that loses is the user who is bothered with ads that make absolutely no sense.

As I understand, advertising on Twitter is limited to a number of markets. So hopefully when more markets open up, targeting of ads will become better and Swedes will get ads from local businesses instead. Because ads on Twitter are here to stay, might as well make them as relevant as possible.