The social network LinkedIn has grown to more than 135 million members and there are now 2.5 million members in the Nordic countries, according to statistics from Socialbakers.com. Sweden has the highest number of users, 862,000, but the highest penetration can be found in Denmark (14.62%). 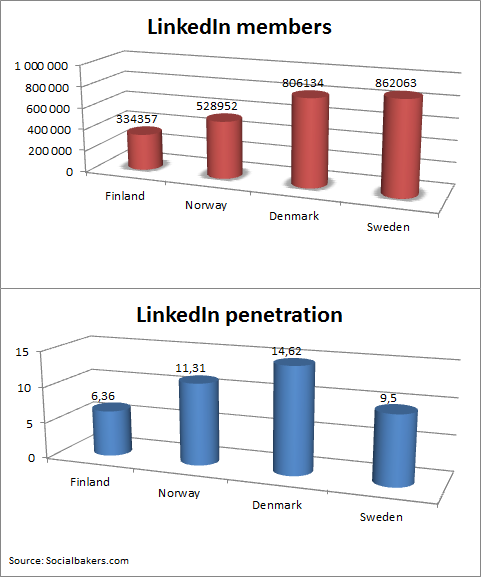 More Americans find jobs via Facebook than LinkedIn
With its career focus, LinkedIn is often mentioned as an important social network for job hunting and recruiting. New statistics show, however, that more Americans claim to have gotten their current job through Facebook than through LinkedIn: 18.4 million compared to 10.4 million. Either way, social networks are increasingly playing a vital role in connecting the work force with available jobs.

Note: Iceland is not yet included in Socialbakers’ statistics. The Finnish based virtual community site Habbo Hotel has launched a social networking feature, Habbo Home. Habbo Home will enable users to build and customise their own home page or profile page and interact with other users writes Brand Republic. Habbo has more than 64 million registered characters in 29 countries.

Free speach in Finland is under attack. Jani Uusitalo, a Finnish blogger was contacted by the Finnish police with a cease and desist letter which demanded he removed information from his blog about events at the elementary school of Korivaara. Uusitalo wrote about the headmaster of the local school who supposedly gave fundamentalist religious schooling to kids in the elementary grades (3-4). The headmaster contacted the police who demanded the information to be taken off the blog, which should be unconstitutional, only a court can order web pages to be shut down

Visit his blog for the full story in English. (Hat tip to Phil.)

I have compiled a list of more than 80 RSS feeds for Nordic media. Included are also press releases RSS feeds. I haven’t tried all of them and can’t guarantee they are working.

UPDATE: I have added 11 feeds for alternative publication Stockholms Fria Tidning. A reflection, how come that it is alternative media and the really big giants that are experimenting with RSS, but few players “in between”, like trade publications?

Dagbladet – On your side