In the aftermath of the Working Families for Wal-Mart debacle, there has been a lot of talk about WOMMA’s code of ethics for online communications. Now PR Week writes (subscr. req.) that “Dell is becoming the largest company ever to formally adopt the Word of Mouth Marketing Association’s (WOMMA’s) code of ethics for online and blog communications”.

And while we are on the Wal-Mart topic, the bad luck for Edelman doesn’t seem to come to an end. Via For Immediate Release podcast #190 I hear that when Edelman set up the organisation Working Families for Wal-Mart they didn’t register the domain with the same name. The organisation’s website can be found at www.forwalmart.com. The most logical domain, www.workingfamiliesforwalmart.com, was instead kidnapped by an anti-Wal-Mart organisation that launched a pretty good parody site. Particulary worth noting is how all the smiling faces in the original are replaced by sad ones in the parody. 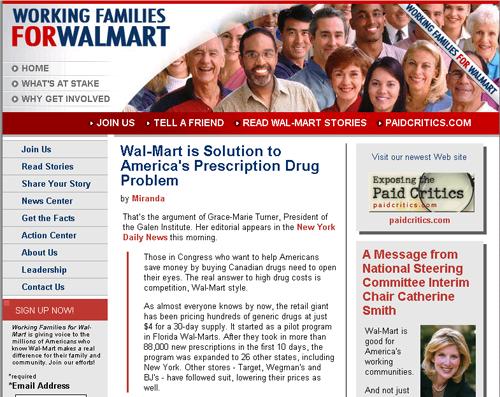 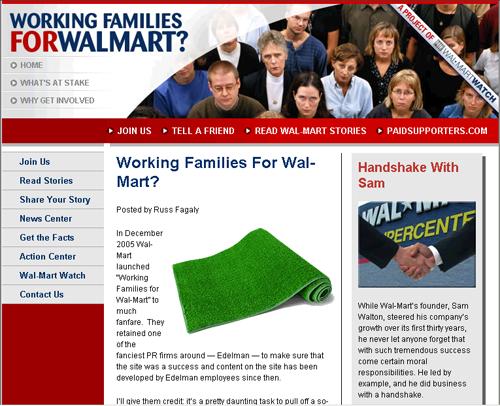 You thought that fake grass can’t grow, think again. Astroturfing seems to be a popular campaign method from both democrats and republicans this fall, and a successful method as well. Here is an example that even shows how many letters that have been sent to certain newspapers. As if sending 121 close to identical letters to the editors at San Jose Mercury News would make any (positive) difference. Haven’t these people heard about Dan Gillmor? Of course it didn’t take him long to debunk this initiative.

The flood of fake grassroots letters to media forced Barbara Curtin, opinion editor of the StatesmanJournal, to voice her concerns, urging readers to use their own words.

“You might have just one chance to write an election-season letter. Make it count.”

Question is at what point an astroturf campaign becomes counterproductive.

David Neiwert wrote an interesting piece last week on Orcinus about astroturfing and the difference between the campaigns of John Kerry and George W. Bush.

Astroturfing – faking grassroots movements – is not a new phenomenon. PR flacks and spin doctors have been using it for years. But with increasing transparency from blogs and media watchdogs, these campaigns can now be more easily discovered than before. This week Daily Kos revealed an astroturf initiative from the George W Bush campaign, which has found its way into at least 60 newspapers.