I use Chrome as my default web browser and I have added two different Chrome extensions that let me determine the influence of a Twitter account directly on Twitter.com. The first one is by Klout and it lets you see the Klout score of a Twitter user, right next to the user’s name.

I have also used a Chrome extension for PeerIndex, but it only displayed the score if you clicked on a person’s profile.

Today I noticed that PeerIndex have upgraded their extension and now when I visit Twitter.com I see this in my feed: 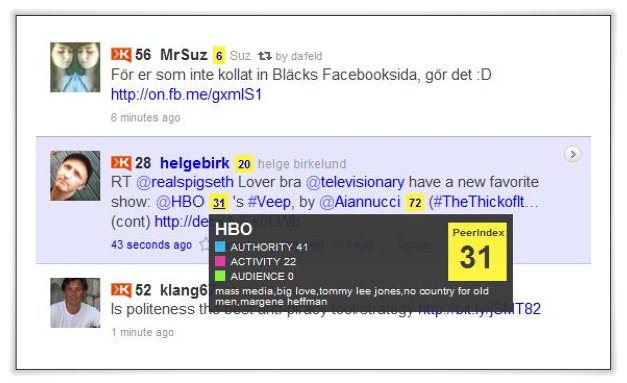 I now see the PeerIndex score next to each account’s Twitter handle, but also all the other accounts that are mentioned in each tweet. If you click on it you are taken directly to the account page on PeerIndex for more details. Also, if I drag the mouse over the score box, it shows a more detailed score of authority, activity and audience, and also some tags that represent the top topics by this Twitter user. This may be used to more quickly get a better picture of different Twitter users and people you may or may not want to follow. If Klout and PeerIndex scores are accurate tools for determining real influence, well that’s an entirely different blog post.

Footnote: My PeerIndex profile is here.

Many brands are considering whether they should have an active presence on Twitter, or not. During the last few years, I have collected close to 500 corporate accounts on my list of Swedish business on Twitter. This list, of course, does not cover all existing corporate accounts, but it is still quite extensive.

About four months ago, I looked at how the top brands, in terms of numbers of followers and Klout score, for example, behaved on Twitter. In January, the list had 350 corporate accounts, now it consists of 471 accounts. You can find my short report from January 2011 on this topic on Slideshare: http://www.slideshare.net/kullin/swedish-businesses-on-twitter. Today I am publishing a quick follow up to that report and what is striking is that the top brands are gaining new followers at a very high rate. The 10 accounts with most followers have on average increased the number of followers by 41% in just four months.

(Note: since I collected this data three days ago, Spotify has passed 100,000 followers)

As you can see, brands like H&M are growing their following very fast, +119% in just four months is quite impressive. The top ten are also exactly the same as four months ago, with only one shift in ranking, Propellerhead has climbed from number 10 to number 8.

Klout score
Spotify is the Twitter account with the highest Klout score: 72. One interesting new entry on the the list of highest Klout scores is the fairly new account by Hilton Stockholm hotel @HiltonStockholm. The Hilton has only been active since November 2010 but has managed to create content that is being spread across Twitter. The account only has 134 followers, but a Klout score of 60, which is quite high. Klout explains this a little: “Hilton Stockholm has a small but tightly formed network that is highly engaged”.

So businesses and brands that are thinking about using Twitter for marketing or customer service should take note, this is a channel that is growing quickly in importance. Consumers and other stakeholders are happy to follow brands on Twitter and along with Facebook this might be the quickest way to build new and lasting relationships with customers, prospects and other influential people online. What are you waiting for?

Disclaimer: there may of course be accounts that I have missed that would make the top ten list.