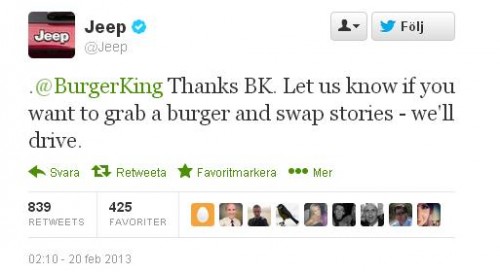 The Swedish Language Council call themselves “the official language cultivation body of Sweden” and it has “no legal powers but fulfil their task through recommendations”. That means that whatever use of the Swedish language the Council recommends, most official bodies and media will conform to it. However, one of the Council’s recommendations on how to use the Swedish language is very unlucky, namely the translation of SUV to Swedish, which is translated to stadsjeep, or “city jeep”.

One could argue that it infringes on a company’s immaterial assets, in a way that might degenerate the Jeep brand name. I’ve been posting about this before, without much reaction.

On the Council’s website there is a FAQ section which contain the very question on how to translate SUV.

How do you write the type of car called SUV so that everyone will understand what you mean?

SUV from English Sport Utility Vehicle is unnecessary to introduce.

I think they are wrong for two reasons. First, regarding the word “stad” (city). A survey by Bil Sweden showed that SUV’s are predominantly not bought by people in the city, so the term city jeep makes little sense. Second, Jeep is a registered trademark by DaimlerChrysler and it can’t simultaneously be a registered trademark, and a generic term in the same product category.

Recently some Swedish media have started to use the term suv (pl. suvar) which is more appropriate. I could learn to use that term and hopefully the Swedish Language Council could reconsider before SUV Expo in Täby in april when a lot of media will report about “suvar”.