Cinemagr.am is a fun app for creating animated images (GIFs) where only a portion of the frame is animated and the rest is in form of a still shot. The app still doesn’t have a very good web presence, so how do you find your images if you want to embedd them to your blog?

Update Feb 2013: this doesn’t work any longer. I haven’t found a new way to locate your profile page.

Of course you can search for them on Google, but there’s a better way. Go to the app on your smart phone and select the image you want to locate. Press on the share icon on one the image (the icon with three dots in a row). Choose “tweet” to share it on Twitter. You don’t actually have to tweet it, but now you can see the url of the image/video in this format:

When you click on this link, it redirects to a web address that has added the letters “OG” to the url you get a new version (don’t asky me why, it just works). If the link doesn’t redirect you to the longer address, you can add “OG” manually, but please note that the url is case sensitive: http://cinemagr.am/showOG/3905295 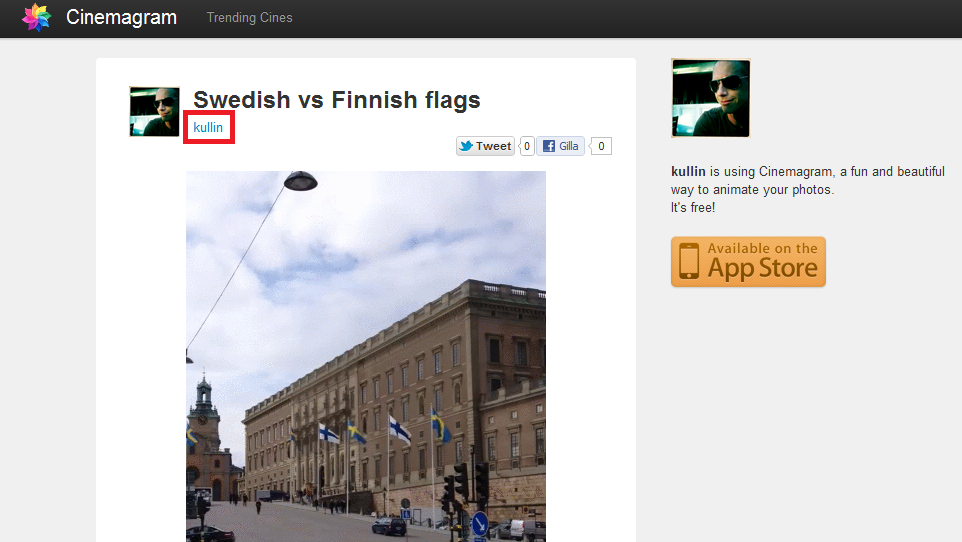 There you see your username, in my case “kullin”. Click on that link to find your profile page which includes your uploads and the images you have liked. http://cinemagr.am/web/user/827705

How do you police a site consisting of close to 3 billion pieces of consumer genererated media? Ask Heather Champ, Director of Community at photo sharing site Flickr, who oversees that the 30 million members of Flickr follow the community guidelines and don’t post pictures that the company consider illegal or inappropriate.

Champ says there is a clear need to have a control function to monitor the site.

“The amount of time it would take for the community to self-regulate — I don’t think it could sustain itself in the meantime,” she says. “Anyway, I can’t think of any successful online community where the nice, quiet, reasonable voices defeat the loud, angry ones on their own.”

Her team handles feedback from people like for example a woman who complains that her ex-boyfriend has posted inappropriate photos of her or the parent without custodial rights who wants photos of the child, posted by the other parent, removed. Champ says that people sometimes do stupid things due to the anonymity of the web:

“People become disassociated from one another online. The computer somehow nullifies the social contract,” she says.

Read the entire interview by the San Fransicso Chronicle.