For some celebrities, social media has proven to be very useful communication channels that reach fans directly. They can communicate their point of view without running the risk that traditional media misinterpret or distort the message. When actor Jim Carrey announced that he and Jenny McCarthy would break up, he didn’t issue a press release. Instead, he simpy tweeted:

“Jenny and I have just ended our 5yr relationship. I’m grateful 4 the many blessings we’ve shared and I wish her the very best! S’okay! ?;^>”

With a simple tweet, he could reach millions of readers before traditional media had time to react. But not everything on Twitter is what it seems to be. Carrey has a verified account on Twitter, which certifies that it is actually The Jim Carrey that is tweeting (or someone he has hired to do so). So if a celebrity doesn’t have a verified Twitter account, you should probably think twice before you assume it is the real thing. 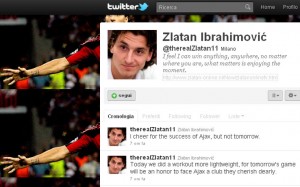 I have blogged before about how AP, Al Jazeera and a bunch of other media quoted a fake Zlatan Ibrahimovic account on Twitter. It didn’t take much work to prove it was fake. And yesterday it happened again as media started to cover the Champions League game tonight between AC Milan and Zlatan’s old club Ajax. Italian tv channel Sky Italia quoted @therealZlatan11 in an article that suggests that “Ibra” had tweeted “I cheer for the success of Ajax, but not tomorrow”.

Of course this is not the real Ibrahimovic. He has never been active online and certainly not on Twitter. You would only need to click on the link in the Twitter bio to see that the link is not to an official site, but to a rather poor fansite from the Netherlands.

If traditional media are going to use celebrities in social media as sources for news, they need to put a little more effort in to research to verify that the source is correct. Otherwise they will look pretty foolish.

Footnote: Thanks to http://twitter.com/ItalianMeetup for the scoop about Sky Italia.