Three days ago I took a look at how many new photos users added on Instagram each day. By looking at the ID numbers of the photos I calculated that Instagram had now reached beyond 500 million photos and that about 4.5 million new photos were uploaded per day. Then I found a blog post from Instagram that summarized last year and in the post it says that at the end of 2011, 400 million photos had been shared in total on Instagram. This confirms that my calculations were pretty accurate (the 400 millionth photo was uploaded on Dec 7, 2011).

If we look at the volume of photos during January 2012, users added approximately ﻿4.5 million photos each day to Instagram. This seems to be confirmed by the statistics from Instagram, that says that the average number of photos uploaded per second at the end of 2011 is 60, or about 5.2 million per day.

Steady growth for Flickr
Now, if we look at the growth of Flickr, it seems that it continues to grow at about the same speed as it has been doing for the last couple of years. Official figures from Yahoo claim that users upload about 4.5 million photos per day to Flickr. But in reality, I believe it is slightly lower than 4.5 million. The 6 billionth photo was uploaded on August 1, 2011. Today, there are 6.7 billion photos on Flickr, which means that on average during the last 5 and a half months, users have uploaded 4.2 million photos per day to Flickr (724 million photos in 172 days).

Here are two graphs describing the development and you can follow the links below for more stats and links to different milestones. 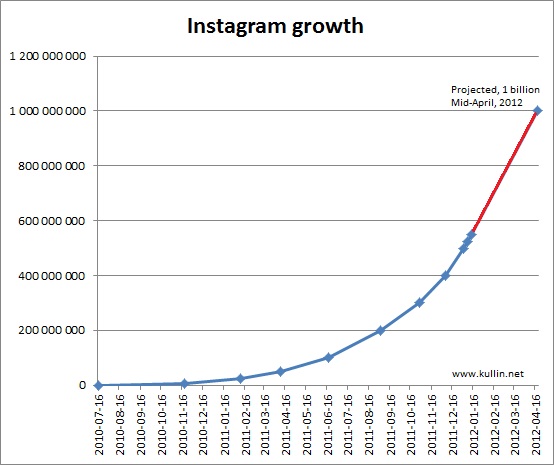 Steady growth for Flickr as it reaches 6 billion photos